Just realised it's been exactly 3 months since i last blogged!! I've been getting complaints from both human and doggy friends that i haven't updated my blog for ages, so here i am again!

So many things have happened in the past 3 months - i've trialled twice (did my FIRST agility trial in August and scored my FIRST clean run ever in the Jumpers trial too - no trophy or ribbon though but that's another story for later)...spent some time indoors and outdoors bonding with my lil' bro Baby T, training training and more training (another trial is coming up in Dec) and basically just having a blast being myself!

I've got so many pictures to share and i'm not even sure where i should start. Let's just start with the photos from the last SKC Jumper and Agility Trial in August! As usual, CK made me look like super-dog! 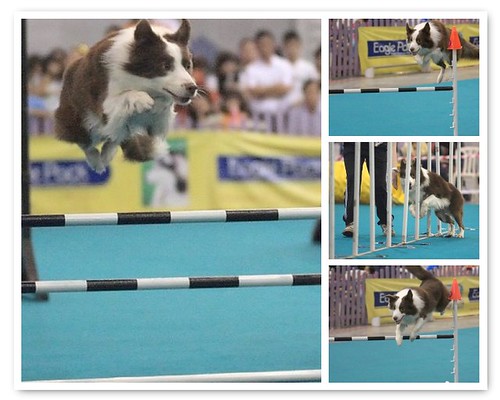 I scored a clean run (no bar-knocking, no refusal, no nonsense, not a single fault incurred!) BUT because S was too cautious with her handling and steered me sooooooo slowly, we finished the course 0.92secs slower than the qualifying time!!! That cost me a rosette and a trophy - what a bummer!! Still, S maintained we aimed for a clean run and got a clean run, so no point whining and bitching about the loss. Just gotta work harder for the future trials, not me but HER of course!!

I've lotsa other photos of me and my lil' bro and i'll post them as soon as i can. Strangely, Baby T is becoming more and more like me and is showing little resemblance to the humans. He recently started to move around on all fours (just like me!!) and has been leaving pools of saliva on the floor wherever he goes (just like me too!!). I wonder if he'll grow some fur and a tail next...or maybe he'll start lifting his hindleg and pissing on everything upright!! What exciting prospects!!