Of Baby T and Bailey

Last year, i had a great time at the National Dog Walk 2007 where i did my first ever frisbee demo (can you believe S was actually pregnant with Baby T when we were doing all those back vaults?!). This year, there were fun activities and agility trials held during the NDW but i wasn't involved because the event spans the entire day from 9am-5pm (the agility trials were from 1pm onwards) and Baby T was due to be baptised in the late afternoon on that same day! Bummer, bummer, BUMMER!

As far as i'm concerned, Bailey (Super Bailey, in fact) was the star of this year's NDW! I've seen him complete the superweaver at the speed of lightning (60 weave poles, OMDOG!) and he's getting better and better with those frisbee tricks!!!! Once i lay my paws on those videos, i'll post them up here!

I'd like to claim some credit for his vast improvement though.... 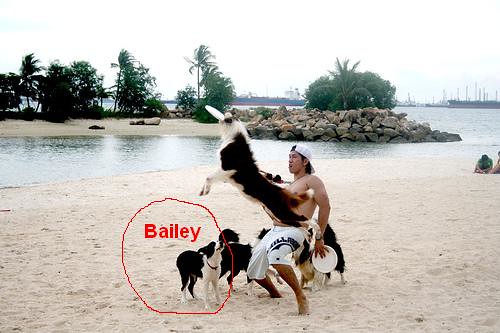 Can you see how intense and focussed Bailey was back then when he was still a puppy?! And now this youngster flies higher than me!!! Way to go, Super Bailey!! 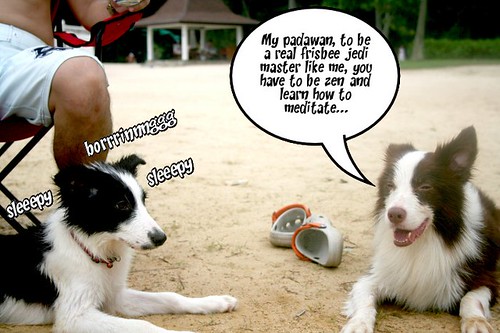 Me teaching Bailey the essence of being a Frisbee Master. The nerve of him to be dozing off!!!

Okkkkaaaaayyy....i admit i didn't do much for Bailey to become Super Bailey. It's all thanks to Mr. Smartdoggy who spent so much time training him! The humans always mockingly scold Mr. Smartdoggy for being a showoff with Bailey but i guess if they had a dog like him, they'd be showoffs themselves too!!

Although i didn't get to go to the NDW 2008, the humans brought my lil' brother to check out the action (BOO!). I was a tad jealous because i didn't want Baby T mixing around with strange dogs! He reeked of weird and smelly dogs when he came home and i wasn't too pleased until the humans showed me this: 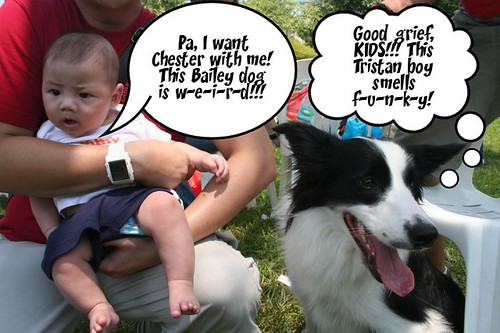 Looks like Baby T only shares a connection with me..tee hee hee!! Even though he's getting rather chubby, i shall strive to constantly remind myself: He ain't heavy, he's my brother!! :) 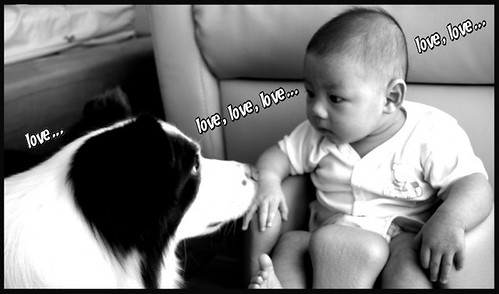